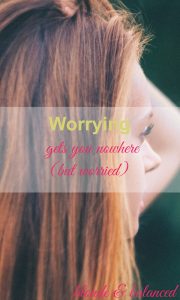 I’ve talked before on this blog about how I’m a bit of a worrywart. (OK, a lot of a worrywart.) I’m so lucky I married The Hubby, because he’s very easygoing, and he can usually talk some reason into me when I start running off all sorts of awful “what if” scenarios for whatever problem we’re facing.

But, the worrywart tendency is still there. So I’ve had to learn some mantras to talk myself down, too. Because as great as The Hubby is, sometimes someone else can tell you something a million times, but until you really tell it to yourself, and listen to yourself, it doesn’t always “click.” (Does that make sense, or did I just make myself sound a little crazy?) J

So, here are things I always tell myself when I start to get wrapped up in my “what if” scenarios. I hope they might help you, too, if you find yourself worrying over things.

Worrying doesn’t do anything (except make you worried)

You can’t control the future by worrying about it. All you can do is ruin the present. While it’s smart to think of what might happen so that you can prepare for any outcome, you need to let go of then of the fact that you can’t predict the future. If things wind up working out just fine (which they normally do), all you’ve done is ruin your day and your mood by bumming out over things that might have happened.

For every 100 scenarios I’ve worried over, maybe 20 wound up going badly (and hardly any of those wound up going as horribly badly as I’d imagined). So whenever I feel myself getting stressed, I remind myself of some recent times when I was worried over something and it wound up just fine.

If this time should happen to be one of those rare times when things don’t go well? Well, then I can just deal with that when it comes. Chances are, though, it won’t.

What is the absolute worst thing that could possibly happen?

I read about this technique on a blog recently (I wish I could remember which one), and it seemed kind of counter-productive at first. Why freak yourself out more by imagining the worst case scenario?

But actually, I’ve found that this does work. First, I think about the worst case scenario reasonably…like, if I’m worried a car repair is going to wind up being really expensive, I picture it costing us a few hundred dollars and we have to figure out how to come up with the money. Usually, I wind up having several ideas right away (we can cut back on eating out this month, etc.), which makes me feel better because I realize that we can handle it if it happens.

Then, for extra measure, I picture the worst case ridiculous scenario…like, I get a call that The ’Bee is totally dead and there’s no chance of repairing her. A tree fell on her in the shop parking lot, then a flood came along and swamped her insides, then a sudden hurricane sprung up and sucked her into the sky…In other words, I picture the craziest scenario I possibly can, until I’m laughing at how ridiculous it is. It reminds me that most of my worries are ridiculous, because really anything can happen, so why bother stressing out over all the possible “what ifs”?

Are you a worrier?  How do you deal with it?