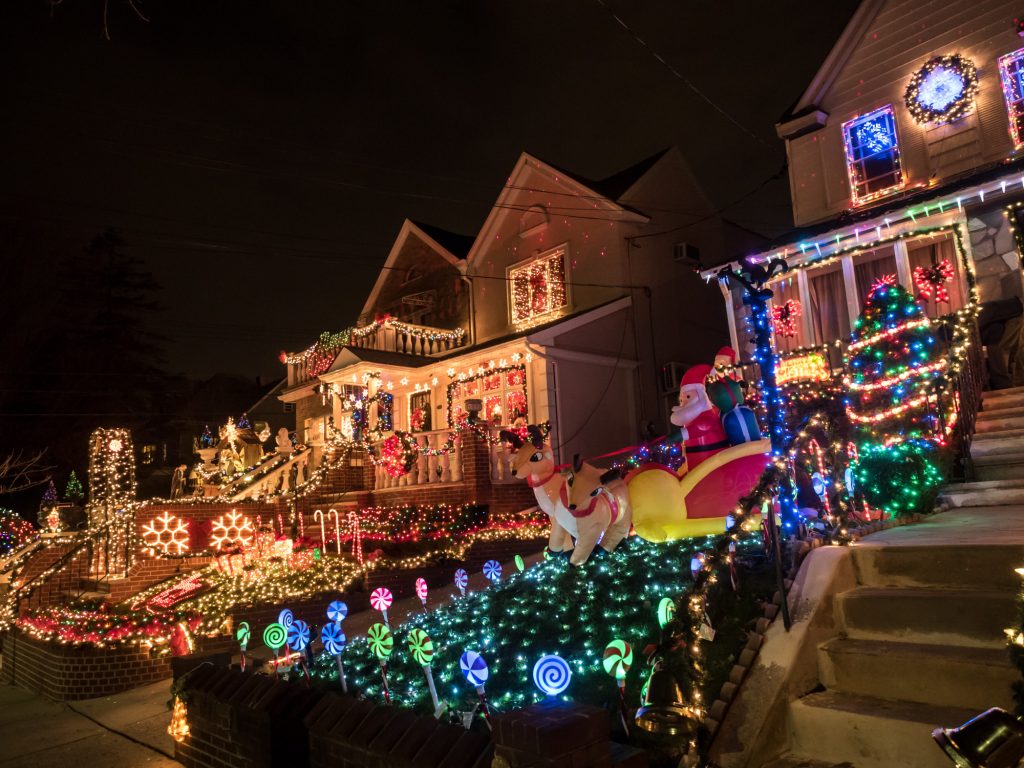 A whopping 90% of Americans celebrate Christmas, even if that just entails decorating a tree or giving out wrapped goodies. If there’s one thing Americans enjoy about Christmas, it’s fun and colorful light displays!

Whether you’re enjoying a snowy Christmas season in the North East or caroling in shorts and a t-shirt in the South, there is bound to be a gorgeous light display somewhere near you.

With so many options to choose from, it’s hard to narrow down the list of best Christmas light displays, but we’ve given it a shot!

Read on for 10 of the best Christmas light displays across America.

Open from early November through early January, Hershey’s Sweet Lights display is located just behind Hershey Hotel. It includes approximately 2 million lights and 600 animated displays that are guaranteed to dazzle!

Pack up your car with treats and family and crank up the holiday tunes as you drive through this winter wonderland. For Hershey Park lovers, the displays built to resemble some of the park’s most beloved rides will be a hit.

Not so familiar with Hershey Park? Don’t worry! There are plenty of classic holiday sights, including a moving ode to the twelve days of Christmas.

Hop over to Maryland for a tradition that began all the way back in 1947. Every year, the residents of the 700 block of 34th street deck the halls and their lawns with lights and homemade sculptures including the famous hubcap tree.

The Miracle on 34th Street runs from Thanksgiving to the beginning of January. If you’re really lucky, you might get a glimpse of Santa Clause as he ho-ho-ho’s his way down the street in the back of a pickup truck!

If you’re up North, check out the drive-through Christmas light attraction in Hartford, Connecticut’s Goodwin Park. The entire drive is about two miles long. You’ll see everything from light-up lords a-leaping to displays of some beloved characters such as Harry Potter.

Holiday Light Fantasia is open from Thanksgiving through New Year’s Day. Each year it’s set up by a local kids’ organization along with volunteers and donors!

Gardens Aglow is made up of 650,000 lights strewn about the Maine Botanical Gardens. Bundle up and take a stroll through the grounds to witness the magic of Maine’s tall trees wrapped from trunk to top in colorful lights. They’ve recently incorporated their sculpture exhibit, Unearthed, into their Christmas display.

They’re open from mid-November through the end of December. Only a certain number of people are admitted at a time, so it’s not a bad idea to buy your tickets in advance!

Nashville is home to so many separate Christmas light displays and the best way to see them all is with a Christmas light tour! If you’re in the heart of the South and you want to spread some Christmas cheer, book a tour and travel in style.

With Nashville’s Christmas light tour, you’ll drive through tons of different displays in and around Nashville in your very own limo. Displays include the fan-favorite, The Dancing Lights of Christmas, where the lights don’t just shine but jump and dance along to classic Christmas tunes!

Zoo Lights run from the end of November through December and is free to the public. Look for whimsical displays like light-up monkeys swinging across the walkway!

Get ready for the biggest and brightest Christmas tree in Missouri history at the Silver Dollar City Christmas light display. From early November through December, they are revealing an 80-foot, fully lit Christmas tree in the middle of what is already a spectacular display!

Catch Rudolph’s Holly Jolly Christmas Parade or take a break from the cold with one of Silver Dollar City’s indoor Christmas performances. Plus, when the weather permits, you can even ride some of the rides–that are also decked out in Christmas lights!

Built on the lawns of Los Angeles residents, Candy Cane Lane makes Californians feel like they’ve stepped off of the beach and into the North Pole. Tons of neighborhoods in LA have picked up the tradition, so you have plenty of streets to choose from!

This isn’t your average lawn decorating. Candy Cane Lane participants go all out, using every square foot of their lawn, roof, and even their powerlines to spread Christmas cheer. It can even get a bit competitive, so keep an eye out for your favorites of the night.

9. River of Lights in Albuquerque, NM

What began as a fundraiser for Albuquerque’s Biopark Botanical Gardens is now a national attraction. This Christmas light display is daring and fun, featuring light-up dinosaurs, octopi, and even submarines!

River of Lights is open from the end of November through December. Stroll the park or catch a ride on the Polar Bear Express, a fun ride for kids and adults alike.

If you’re down in the South East for Christmas, don’t miss out on Nights of Lights, a display that takes over the entire historic district of St. Augustine for over two months.

This is a great opportunity for history buffs, as the Nights of Lights pays homage to the historic Spanish tradition of placing candles in the windows during the Christmas season. Over 3 million lights cover every building, tree, and bush and you can choose to walk through the town or schedule a bus or boat ride.

It’s so hard to compile a list of the best Christmas light displays, but just thinking about it makes us want to turn up the Christmas tunes and roast some chestnuts!

We want to hear about any displays we may have missed! Let us know about your favorite Christmas light displays in the comments!