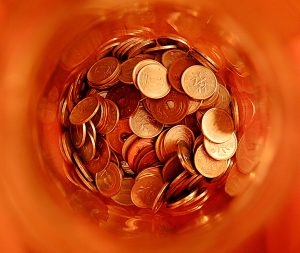 Good morning Loves. Have you ever had a really bad money day? I have had a few – most notably when I realized I was over $50k in debt and wouldn’t be able to pay it back. But that’s a story for another time. So has it ever happened to you – one of those earth shattering bad money days ? I mean a really bad day when everything related to your money just goes wrong from overspending to being ripped off.

Well I just had one and it took me two days to get over the devastation. I woke up Friday morning and everything from that moment until the time I went to bed was a total money disaster. I went through a range of emotions from sadness to anger and then finally defeat.

When I was younger, and mismanaged my money, a bad money day would be the difference between buying groceries or paying rent. Now bad money days aren’t as financially devastating as they are just inconvenient and a total pain in the butt.

2 tips to help you deal with a bad money day:

Prevent yourself against future credit card fraud. My credit card had over $300 in fraudulent charges. Five years ago when my credit cards were always maxed out this would have put me over the limit and caused additional fees while the company investigated the fraudulent transactions.

Now that I am debt free I don’t appreciate having fake charges on my credit card because it’s inconvenient to spend an hour on the phone explaining the situation to a customer service representative. However at this point in my life it’s not a life or death financial situation.

I immediately cancelled my credit card and changed the number. It’s nice to know that I can live a few days (even longer) without having a credit card in my wallet – this wasn’t the case five years ago because I lived in a cycle of bad credit.

Just breath because it will (eventually) fix itself.  Panic is the first thought that crosses my mind when I overpay for a purchase or when my credit card has fraudulent transactions. If this happened five years ago I would have been an emotional wreck. I would have flipped out on the customer service representative and yelled at the cashier who over charged me, but that never helps because it’s not their fault.

Now a bad money day is more inconvenient than anything else. In my previous money life fake credit card transactions or overpaying above and beyond my budget would have had a long lasting financial impact. Now they still suck but at least I can recover from the damage.