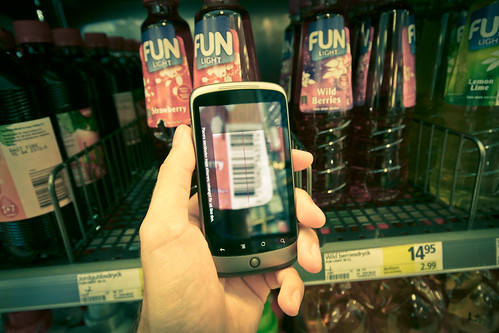 I think it’s time The Hubby and I join the 21st century and look into getting a grocery list app for our smartphones.

The Hubby sometimes calls on his way home from work to let me know he’s picking something up at the grocery store or drug store, and do I need anything? If I’m home, it’s easy enough for me to run over to the fridge and read off anything from our shopping list. But if I’m out, the best I can do is try to remember what we’re low on, and I always wind up forgetting something.

I’ve also more than once left home to go shopping and totally forgotten my list. Being a PF fanatic who refuses to buy things I don’t need, that means I have to turn around and go home for them…even if I’ve already gotten to the store.

The easiest way to avoid all of this would be to get an app that lets me store my shopping lists right on my phone…ideally, one that I can sync with The Hubby’s phone so we’re always on the same page. If I add something to the list, it would pop right up on his phone, too. If he buys something while he’s out, it gets crossed off my list on my phone so I don’t accidentally buy the same thing.

But I’ve gotta be honest: I’m not a huge smartphone person. I have one because it was nearly free when it was time for me to upgrade with my phone provider, but I mainly use it to play games. I’m not up on all the latest apps, and just doing a Google search for them leads to so many choice I don’t know where to begin!

So, I thought I’d turn the tables over to you, since I know you’re all super-smart people who have plenty of great tricks when it comes to saving money:

What grocery list apps would you recommend? I’d prefer free but I’m willing to spend a buck or two if there’s a really great one out there. And syncing would be a huge bonus. What do you guys recommend?