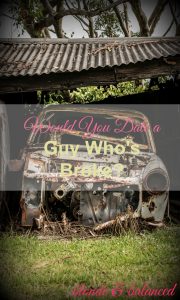 If you’re single and looking for Mr. Right would you date a guy who’s broke?  The answer should be no.  Having a spouse with a less than perfect credit score, no money in the bank and more debt than he can afford to pay off is not an idea situation…not for adults.

When you’re young and broke it doesn’t matter if your boyfriend has no money because you probably don’t either.  However when you’re in your late 20s and early 30s you should be planning the next phase of your life, not living paycheck to paycheck just trying to make ends meet.

According to Marie Claire magazine “78% of people prefer a financially savvy partner to an attractive one.”  As a financial planner it’s comforting to know that savvy women aren’t looking for a Ken doll, they’re looking for a Bill Gates.  This isn’t necessarily because women are gold-diggers, it just means that they don’t want to live happily ever after by paying to support their spouse – and that’s a fair request.

Women want a man who budgets.  Smart women want a spouse who is passionate about his career, wants to work towards goals and plans (financially) for the future.  Don’t we?  It’s hard to build a life with someone who isn’t on your level professionally, emotionally and financially.

Here are some red flags that your guy is broke:

He hesitates when the check comes

If you find yourself always picking up the bill when you two go out to eat ask yourself why.  Is it because he always conveniently has to go to the bathroom at the end of the meal?  Is it because he hesitates to grab the check after the waiter puts it on the table or is it because he coincidently always leaves his wallet at home?

Whatever the reason may be it should stop.  Think about your last few dinners out.  If you’ve paid for the check more than twice (meaning half) then your man may be broke.

His credit card bills come in the mail

When’s the last time you got something in the mail – other than your Birch Box or Victoria’s Secret order.  The answer is probably not very often.  People who are financially responsible keep up to date with their finances through apps and online banking.  I don’t know about you but I check my account transactions and balances at least once a day…at least.

If your boyfriend receives his electric bill and credit card statements by mail he may not be on top of his finances and that’s a problem.  It can also lead to missed payments and low credit scores, those are two even bigger problems.  How can you plan a future with someone who can’t afford to buy a house or lease a car?

According to She Media a boyfriend who always makes excuses as to why he has no money is a total deadbeat.  ” Deadbeat boyfriends are notorious for having a million excuses about why they are constantly broke. The economy is bad, his former boss was a jerk, he’s waiting for the check to come in, etc. What they don’t have, however, is a plan to turn their financial situation around.”

He only pays bills at the end of the month

A truly financially savvy person (man or woman) doesn’t wait for the bills to come in the mail before making payments.  A person who’s good with money knows when their bills are due and pays them well in advance.  If your guy pays bills once a month at the end of the month he’s probably mismanaging his money.

I have automatic payments set up for my cable, hydro and cell phone bills.  This way I don’t have to make a lump sum from one paycheck which could leave me with a low cash flow until next payday.  Splitting monthly bills into two equal payments ensures all my creditors are kept up to date and a payment is never missed.  it’s also very easy for budgeting, I hate financial surprises.