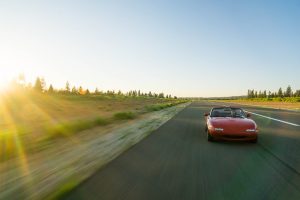 I did.  In 2007 I bought a new car and swore it was the biggest financial mistake I ever made.  I sold it three years later and now five years after that BF and I are thinking of getting another new car.  So here’s my question, do you have a car and if so did you buy it new or used?

There are several advantages of buying a new car such as the warranty on parts and service as well as the peace of mind that comes with something new – and of course there’s the new car smell.  I will never forget the day I picked up my car from the dealership and sat in it for the first time.  I was 27 years old and felt like a true adult for the first time in my life.

Buying a new car is a big girl purchase

Buying a new car was the biggest purchase I’ve ever made and I was more than happy to parade it around in front of my family and friends whenever I could.  My parents didn’t really seem to care too much, but to me buying a car was a really big deal.

A new car comes with new financial obligations that I definitely wasn’t ready for.  The car payment alone was $500, then I was paying $125 in parking, $50 every two weeks in gas and $100 a month for car insurance. Overnight BF and I suddenly had a newfound $775 in monthly expenses that we definitely couldn’t afford.

A new car costs a lot of money

I would love to tell you that it was all worth it because our brand new Honda Civic was just that awesome, but unfortunately the cost wasn’t worth the benefit for us.  Since we lived in the city and both worked less than 30 minutes away on foot we always walked to work.  Of course it would be easier to drive, but I refused to pay $125 for parking in our apartment building and another $250 per month for parking at the office.

We really only used the car on weekends to run errands, get groceries and for weekend road trips.  We sold it three years later with less than 30,000 kilometers on it.  I was sad to see it go, but I love saving the extra money every month.

A new car is more expensive on insurance too. That’s why I always check youi car insurance quotes to see how much the car insurance will be before I buy a new car.

The case for buying a used car

A lot of people who have bought both new and used cars say that they will never buy used again.  For some people the inflated cost just isn’t worth it.  I like the idea of having something new, but then again having something that’s only a couple years old and saving thousands of dollars is O.K. too.

It took a long time for our Honda to become fuel efficient.  The dealership says that this usually only happens after 10,000 kilometers.  It took us over a year to reach that point on the speedometer and until that point it seemed like our car was drinking gas.  Now remember this was back in 2008-2009 when gas prices were very high.  Buying a used car means this is already worked out.

So what would you do?  Buy a new or used car? Photo from Pixabay