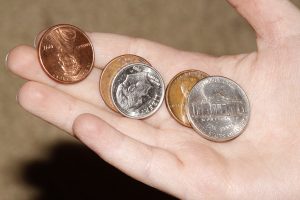 Good morning loves.  Remember my awkward money moment last week when I had a nervous breakdown in front of the pizza delivery man?  Well this week I had another slew of bad money luck, but for some reason this time it didn’t bother me too much.  This week I spent over $1500 unexpectedly and I didn’t burst into tears.  Why is that?

To start off the week my new laptop broke.  I bought my HP laptop about a month ago and I truly love it, but the mouse stopped working.  It wasn’t a really big deal because the laptop has a touch screen so it was still functional.  However the HP rep told me to send it back for repair anyways – absolutely free of charge because it’s under warranty.

If this happened a week ago during my money meltdown I probably would have smashed my new laptop into pieces, but surprisingly it didn’t bother me too much.  Maybe it’s because I still have my old laptop as a backup or maybe it’s because I will be on vacation in NYC as of Friday so I won’t be working anyways.

Then our TV started flashing yellow

We bought our 45” Samsung TV less than two years and now the bottom right hand corner has a yellow hue.  This is less than an ideal situation but because we purchased an extended four year warranty for an extra $300 Best Buy will repair the TV at no additional charge.  That sounds great right? Well it turns out that the TV is too damaged to repair so they are going to give us a new TV.

My boyfriend doesn’t want to have a brand new two year old model.  So we are upgrading.  That’s right for $1400 including the price difference, the $300 for the new extended warranty and taxes we are paying $1400 to get a brand new 2014 Samsung TV.  Not my choice but that’s the thing about being in a couple – you always have to pay half.

Of course I was not thrilled about my boyfriend’s decision to upgrade our TV but I didn’t freak out on him.  Strange.

And finally, my phone broke

As of Monday my Blackberry started only typing the letter j.  The phone was sent to repair twice in the last two years and this time the sales rep told me the phone can’t be repaired.  So Monday night after work I had to go and get a new cell phone.

$114 later I walked out with a new iPhone 4s.  I know what you are thinking – but that’s an old model.  Yes that’s true but I don’t need anything more sophisticated and any form of iPhone is an upgrade from my Blackberry.  It would have cost me a lot more to get a newer model and the truth is I don’t need it, so why pay for it?  I only use my phone to check email, send texts and follow Twitter.  Last week I broke down into tears when I had to spend $114, but this week it didn’t bother me.  Maybe it’s because I am paying for an upgrade or maybe it’s because I secretly always wanted an iPhone.