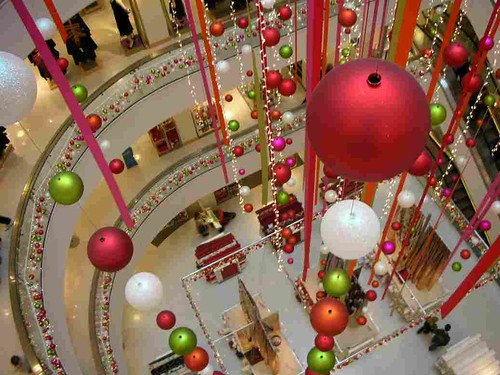 Well, actually, they were here some time in early October. But most of us managed to ignore them at least until Halloween was over.

Now, though, the holiday sales machine is in full swing. Festive commercials are every, urging us to buy sweaters and jewelry for our loved ones before the first snow has even hit the ground. The Toys ‘R Us “Big Book” of toys was in my inserts the other weekend. (Remember how amazing it was to get that book when you were a kid? I spent hours pouring over it (and circling all the things Santa absolutely HAD to bring me, haha!))

Now, I love bargains, and I LOVE love Christmas, but even for me, this is just too much.

Not to be a grinch, but…

I am the kind of person who will haul all the Christmas decorations down from the attic the day after Thanksgiving and insist we put them all up that day. (I don’t do Black Friday, but that’s a post for another time…a time closer to the actual Black Friday!) I’m one of the few people in the world who actually likes it when the local radio stations start playing 24/7 Christmas carols. I listen to those carols, and I sing along at the top of my merry little lungs.

I am a huge little kid (is that an oxymoron?) when it comes to Christmas. Bring on the eggnog! Bring on the old Claymation holiday specials! Bring on the red Starbucks cups that everyone and their mom is apparently talking about online lately.

But bring them on the day after Thanksgiving.

You know when I knew it was officially Christmas time when I was a kid? When Santa Claus’s sled came out at the end of the Macy’s Thanksgiving Day Parade. That seemed pretty clear-cut, right? The Thanksgiving parade was over, and Santa (the real one, of course) had flown down to NYC from his busy toy shop in the North Pole to announce to the world that it was officially ho ho ho season.

He did not sneak into Target in early October to start setting up the special holiday decorations section. He did not make a special flight down from The Pole to turn all the pumpkin spice lattes into gingerbread lattes a month before anyone had any real pumpkin pie. He didn’t tell the producers when he was shooting that “They are real!” M&M’s commercial (because clearly that was also the real Santa) that it was OK if they started airing it the instant the kids got home from trick or treating.

Because you know what that kind of stuff does?

It makes everyone…even me, who owns no less than 10 pairs of holiday socks and wears them proudly…get sick of the Christmas spirit before the turkey has even hit the Thanksgiving table.  And that’s just sad.

How do you avoid getting tired of Christmas before it’s even Thanksgiving? And when you do think “Christmas” will start next year? (I’m guessing some time around Labor Day.)