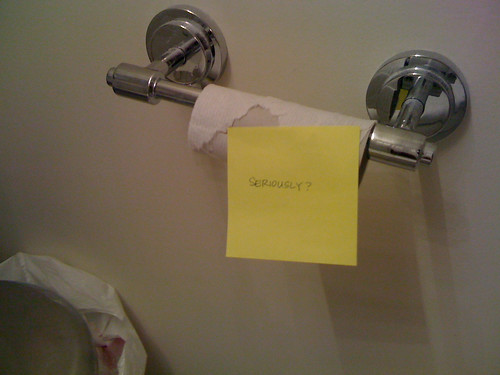 When The Hubby and I first started living together, I was a born-and-raised under-the-roll girl. It just made sense…under the roll, you could more easily rip the TP off. Over the roll just felt weird.

But, The Hubby had been raised in an over-the-roll household, and after enough silent battles where whoever changed the roll put it on their way, I gave up. The way the TP holder was positioned near the toilet in our first apartment, over-the-roll actually gave me better leverage for ripping. (Does this qualify as “TMI”?) So, I gave in to The Hubby’s ways. It still felt strange for a while, but now, it’s what I’m used to.

Actually, I think it’s become an asset. I’m kind of like someone who’s bilingual…if I find myself in a “foreign” (i.e, under-the-roll) situation, I can understand. It makes perfect sense to my brain. If I find myself in an over-the-roll environment, that, too, makes sense. My horizons (and preferences) have been expanded by being introduced to a new way of thinking.

Yes, this is kind of silly topic to be debating…but so are so many of the things that can get on our nerves when we first start living with someone.

My mom taught me to fold socks by rolling them up into these cute little sock-balls. (Nice and neat, and so handy for chucking at younger siblings.) The Hubby’s mom always folded his socks by just turning over the ends of the cuffs and tucking them, so that the rest of the socks hangs loose. This seemed much less adorable and space saving to me. But, I do the laundry in our household. (My sock-balls win.)

My parents used to put everything possible in the fridge…peanut butter, bread, syrup, baked goods. The first time I came home from grocery shopping with The Hubby and he put the peanut butter in the pantry, I was thoroughly confused. It took me several weeks of reassurance (and eyeing the pb jar warily) before I could accept the notion that maybe it wouldn’t spoil and it might be OK to eat it. Now, I find the concept of cold pb and cold syrup gross, and I wonder how I ever ate it that way. (Hubby’s upbringing wins.)

It’s little things like this that you have to tweak and give in over when you combine two lifestyles into one. The bigger differences, the things that really take some getting used to, can be tough enough at first. There’s no point in getting worked up over silly little differences in the grand scheme of things.

What differences do you and your s.o. have, and how have you overcome them? (Or are you still debating over who “wins”?) 🙂