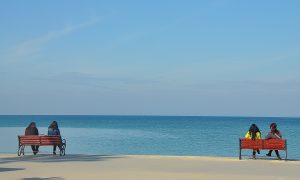 However there are some common money issues that can become a sore spot in relationships.  If you’re ready to take the next step in your relationship having the money talk is a good idea sooner rather than later to avoid any surprises that could lead to financial struggles later on down the road.

Think about how you deal with these common money issues in your relationship.  If you’re wondering if  you and your sweetheart are making the most out of your money ask yourself these three questions to get the conversation started.

Who controls the money in your relationship?

Finder, a personal finance education resource and comparison site, conducted a survey on America’s biggest money mistakes. The survey polled almost 2,000 Americans, and they found that 19% of Americans surveyed said they let their partner control our finances – and regret it.

One spouse may earn more than the other in a relationship, but that doesn’t mean the breadwinner has to control the household finances.  That may work for some couples, but in my experience it leads to animosity in the relationship.  I couldn’t imagine having to ask my boyfriend for money to spend, but maybe that’s just our relationship.

Does having children fit into your financial plan?

It’s no secret that kids are expensive.  My Dad always says he loves his two daughters, but his life would have been very different if he didn’t have children.  Having kids isn’t for everyone, BF and I don’t plan on having kids because it just didn’t fit into our plans when we were younger and now that we’re in our mid 30s it seems to be too late.

The survey found that people with higher incomes, $100,000-$149,000, were the most likely group to say having children was a money mistake.  Sometimes couples prefer to travel or enjoy a more luxurious lifestyle over starting a family.  That may be O.K., but it’s a conversation that couple’s need to have when planning their lives.

Did you overpay for your wedding?

Some people spend tens of thousands of dollars on their wedding day because it’s probably the biggest party they will ever host.  Others seem to think that spending that much money on one single day is a financial mistake.  I am not married, but I like to think I’m somewhere in the middle.  I would like my wedding day to be beautiful, but not if it costs more money than I can afford.

I wouldn’t want to start my happily ever after with a ton of debt because I know firsthand just how stressful money woes can be in a relationship.  According to the recent survey men were more likely to admit paying too much for a wedding as one of their financial mistakes.

Now going back to the original question, how is money in your relationship?