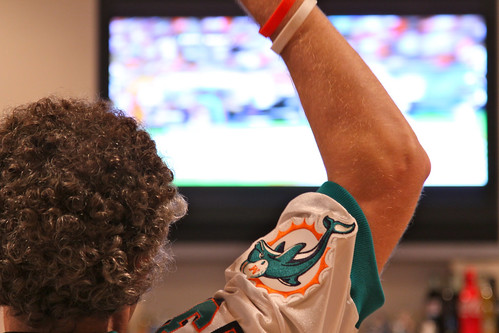 Otherwise known as “the season I become a temporary widow.”

You see, my husband has a mistress. Or an addiction. Really a combination of both. We’ve been together for 5 years, and I only finally came to accept it last year.

He is a diehard, scary-obsessive football fanatic.

This took a lot of getting used to.

Let me sketch out a typical day for him during the NFL season:

Let’s just say it took a while to get used to this.

We’re a pretty cutesy couple. Some people might call it sickening. We spend a ton of time together, we don’t really fight, and when we do fight we can’t stay mad at each other for very long because it makes us sad. (See? Sickening.)

But the first fight we have ever had (and the biggest fights since) was because of The Hubby’s football obsession.

I JUST DON’T GET IT.

I mean, apart from the fact that I’m just not that into football, there is nothing I love so much that I will spend an entire day, from morning to night, doing nothing but living and breathing that thing. Especially not when I have a cute spouse who wants to spend at least a few minutes hanging out with me. (In his defense, he always asks if I want to watch with him, but I just can’t do it. Ten minutes max and my eyes glaze over.)

At first, I just couldn’t understand how he could be SO obsessed with something.  I was also—I’ll admit it—jealous.  If I ever spent an entire day watching HGTV, reading home décor magazines, re-covering my throw pillows, and simultaneously playing a game where I redecorated a virtual house, he would give me the sad pouty eyes and ask when we’d get a chance to hang out.

But you know what?  I think if I really loved home decorating as much as he L-O-V-Es football, he’d be happy to let me do it. Because (once I got over the jealousy thing) I finally saw that he’s like a little kid on Christmas morning every Sunday. Football makes him so happy, I just can’t hold that against him…even if it makes absolutely no sense to me.

That’s part of what relationships are about, right? Letting the other person have their “things” while you have your “things,” because that makes your collected things seem more special? I get that now.

Plus, Sundays have become a great “me” day now that I’ve accepted the other lady in our marriage. I have all kinds of fun on Sundays totally unsupervised.  🙂

What hobbies do you or your significant other have that the other person just doesn’t understand? How do you set aside time for “me” time?