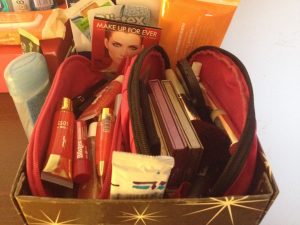 Good morning Loves.  It’s official…I’m on a cleaning binge.  You know how I told you I like to spend my Sundays in bed binge watching Netflix? Well with our upcoming move I’ve decided to let my binge fever get the best of me and I’ve started cleaning house.

I used to be a “I’ll keep it just in case” kind of girl, but now with our upcoming move I’m purging everything that I haven’t used in the last six months.  That’s right if I haven’t worn, used or touched something in my apartment since January 1, 2014 I am getting rid of it.

To be honest it really breaks my heart to throw my belongings away because I feel like throwing my stuff in the garbage is like throwing away money – and in some way it is.  However it is extremely unhealthy to keep clutter in my home.  I want to move to our new apartment with a fresh start and for me that means less stuff.

When is the last time you binge cleaned your home?

If you’re like me you bought clothes that you didn’t need because they were on sale and you keep shoes that look worn just because they’re comfortable.  But now we just have to man up (or pony up as my BF says) and throw our old and unwanted things away.

I shouldn’t say unwanted because that’s not what I meant.  All my stuff is wanted because I bought it.  Unusable is probably the right word.  Have you ever kept something that you loved even though it was old and worn and you probably won’t ever wear it again? Meet my cream colored belt.  I bought it three years ago at TJ Maxx because I saw J.Lo wearing a similar one in an interview; but other than that one summer I haven’t worn it since.   I keep it hanging in my closet just in case I need to wear a cream colored belt some day, but the truth is I shouldn’t keep it because I’m probably never going to wear it.

When I told my mother (who is the neatest, cleanest person you’ll ever meet) she asked me “Why are you going on a cleaning tirade?”  I’m not sure it’s a tirade, more like a tornado; I’m the Sharknado of cleaning right now.

I have a lot of (unused) stuff

When I tell you that I have stuff I mean I have A LOT of stuff.  I am not a crazy hoarder or anything, don’t worry.  I just keep a hefty supply of lip gloss, nail polish, body wash and moisturizing cream on hand.  I don’t need all of it and honestly it’s just taking up space in my (tiny) apartment.  I am hoping the heartbreak of throwing out my belongings will be dramatic enough that it will stick with me and I’ll think twice before I buy another lip gloss…or whatever.

I am probably not going to become a minimalist, but I am definitely going to stop living in excess of certain things.  Stay tuned  over the next few weeks as I rifle through my clothes, shoes, bags and other stuff to get rid of unused items all around my apartment.