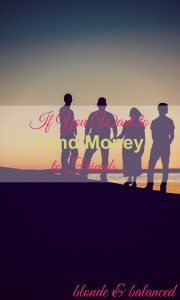 I think lending money to anyone – family or friends – is a sensitive area.  On one hand you want to help your loved ones, but on the other hand you may be taken advantage of because friends are willing to blur the lines when it comes to repayment.

If you want to lend money to friends keep these things in mind before you do:

Don’t get into debt

If you don’t have the money to lend I would always say no.  There is no point in getting into debt for a friend.   If your friend is asking you to lend them money they probably don’t have the best credit score and have very likely been declined by a bank.

If your credit is better it doesn’t mean you have to use it.  If I had the money I may lend it friends, but I certainly wouldn’t get into debt for them.

This may seem totally weird, but I can’t tell you how many times I’ve seen a case on The People’s Court where there was no proof that the money was a loan because there was no contract signed.

If your friend decides not to repay and you do want to pursue legal action you need proof that the money was not a gift and that it was supposed to be repaid.  A contract helps make sure this happens.

Set up a repayment plan

At the time you lend money to friends set up a repayment plan.  This way everyone is on the same page when it comes to the money.  Setting expectations from the get go help ensure you both know when the money should be paid back in full and if interest applies.

Talk about the consequences

The contract should also include what happens if the money isn’t repaid – either by the monthly due date or in full at the end of the term.  This can include additional financial penalties or an extension if necessary.  It’s important to have firm dates in place that aren’t contingent on any variables.

A repayment promise like “I’ll pay you back with my tax return” is no good because what happens if your friend doesn’t get a refund come tax time.  This is why setting expectations and a repayment plan along with having a signed contract are so important.

Be ready to ruin your friendship

This actually happened to me with the friend who didn’t pay back the money I lent her.  I felt so betrayed that I couldn’t stand to spend any more time with her.  It was a little bit about the money, but it was mostly about being taken advantage of and having my trust betrayed by someone who was supposed to be my friend.  That was  deal breaker for me.

I’m not saying every monetary transaction has to end this dramatically, but you need to be prepared that it’s a possibility.