I grew up in a family where budgeting wasn’t emphasized or even used. So when I graduated college and entered “the real world”, I had to teach myself how to budget. I distinctly remember sitting in my apartment with a budgeting spreadsheet that I found on Pinterest and discovering that I was spending twice as much as I made per month. That’s when I realized things had to change. If I could go from living way beyond my means to taming my budget and even paying off debt each month, then there’s hope for you! Here are the tips I used to stop spending more than I made so I could change my financial future. 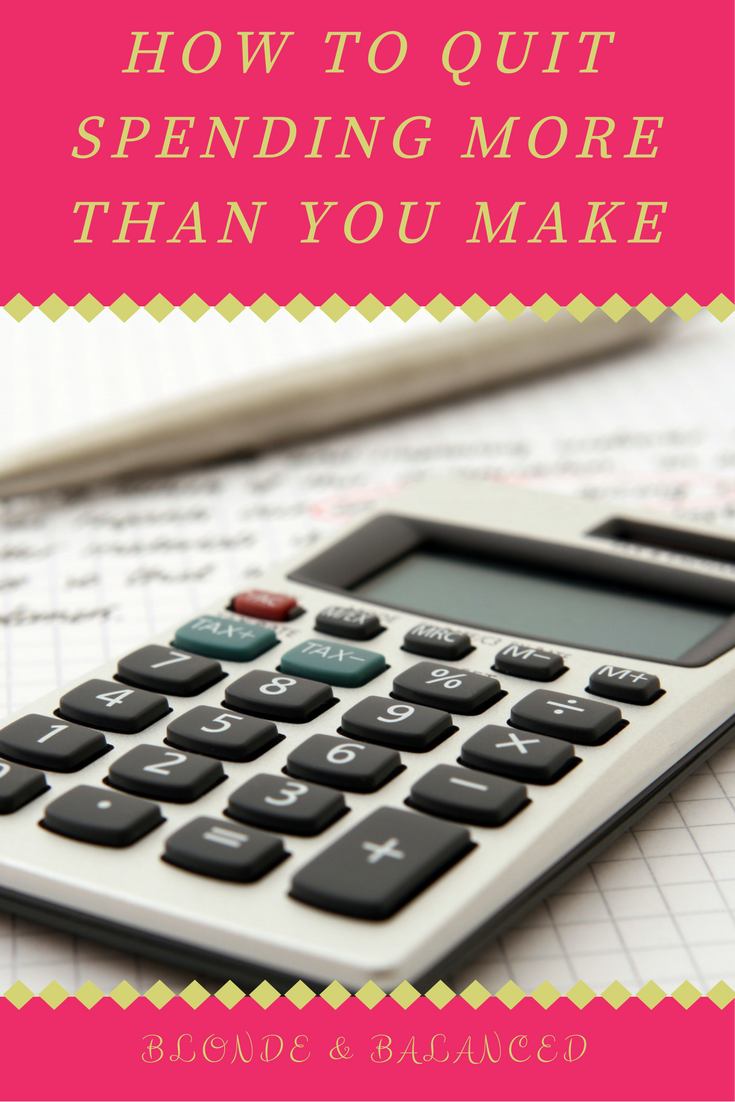 Figure out how much you make.

One of my friends used to work in Human Resources, and she once mentioned to me the number of employees who never checked their pay stubs at her company… it was astounding! Even worse was the number of employees who had no idea how much money they made per paycheck or per month. I recommend checking your pay stub each time you are paid to confirm everything is correct and that you aren’t accidentally being over- or under-paid. If you look at a few months’ worth of pay stubs, you can determine the average amount of money you make per month.

Starting with your debts, such as student loans, car payments, and mortgage, figure out how much of your monthly income goes toward repayment. Look at only the minimum payments because paying extra on your car loan does you no good if you’re putting groceries on a credit card (While you’re at it, take a look at how much your total debt payments will be. Some people have no idea how much their debts are other than the monthly payment. It will motivate you to pay off debt!) If the monthly payment is unsustainable, taking advantage of historically low interest rates, and consider refinancing your existing student loans.

Subtract your monthly debts from your income.

This determines how much money you have left to spend on other monthly expenses.

Figure out your monthly expenses.

Look at other recurring monthly expenses such as utilities, groceries, gasoline, car insurance, and the like. Also, determine how much money you are spending on non-necessities, such as eating out, shopping, traveling, and entertainment.

Make cuts in your budget.

This is the hard part. Nobody likes to reduce their lifestyle, but when you spend more than you bring home each month, it must be done. There are some areas that you won’t be able to cut immediately, such as rent or mortgage. However, there are some other areas where you can make immediate cuts. Try carpooling or combining errands to spend less gasoline. Go grocery shopping at a discount grocer or meal plan to save money on food. Avoid driving by the mall on your way home from work so you aren’t tempted to go shopping. Check out your local library for books and movies instead of going to the bookstore or theater. Cut out cable for online streaming. Shop around for the best prices on auto and homeowners/renters insurance.

If you’re still spending more than you make, then it’s time for drastic cuts.

At this point, if you still don’t have enough money for each month, it’s time for drastic cuts. You may need to move to a cheaper apartment or get a roommate; if you own your home, you may need to refinance for a lower interest rate or sell and downsize to a smaller home. A friend of mine temporarily moved back into her parents’ house because she couldn’t afford an apartment thanks to the amount of debt she was carrying; she stayed there until she got her debt under control.

Stick to your monthly budget.

I know too many people who are struggling to get by, and instead of budgeting, they just spend money as they have it. That’s probably the worst thing you can do! To them, they have plenty of money in the bank to go out to eat (after all, it’s just one meal), but in reality they may have just enough to pay the bills. Many people use the cash envelope system that Dave Ramsey teaches, while others use computer-based software such as Mint or You Need a Budget. I use a simple Excel spreadsheet. It doesn’t matter which system you use, just that you find something that works for you.