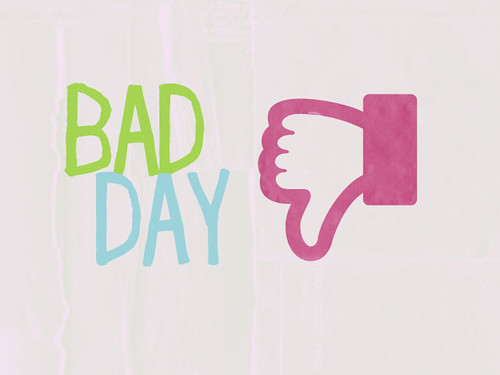 For the most part, I like to think I’m pretty on top of things. I have my little tips and tricks to make life easier, I’m a fairly organized person, and I try to avoid inconveniences whenever I can predict them.

But sometimes you can’t predict them. Like, for instance, yesterday…

The day that went totally wrong

Yesterday was one of those terrible, horrible, no good, very bad days.

I started off with everything lined up right (in my head): finish writing my Wednesday post before work like I always do, go to work (where I had a bunch of big deadlines but was totally on top of them!), run some errands on the way home, and have dinner with The Hubby. (We’re both busy on date night this weekend, so we thought we’d do it midweek instead.)

Everything was good to go. Or so I thought.

The first thing to go wrong was my post. Our internet had been acting weird all week, and of course, it decided to fritz out in the middle of the post I was writing. No big deal, I thought, I can finish it on my lunch break. I hate being late with posts, but it wouldn’t be the end of the world.

The next thing to go wrong was The ’Bee. As soon as I pulled out of driveway and started turning the corner on our block, I heard this horrible ca-chunk-ca-chunk sound every time I turned the wheel. (At least, that’s how I described it to The Hubby, being pretty useless when it comes to describing car noises.) Being a worrywart, I didn’t want to take The ’Bee up onto the expressway in rush hour making such noises, so I had to turn around, go back home, and call a coworker (who thankfully hadn’t left her house yet) to ask if I could hitch a ride in with her. She’s not super-far away, but far enough that waiting for her to get to my house made us both about 20 minutes late for work.

OK, so no big deal. I could make up the time on my lunch break (and just work super fast to finish my post).

Until I learned that the coworker who was helping me with all those big deadline projects was out sick. OK, things could still be alright, I thought. I basically understood what her part of the projects were, and I was sure I could ask the other people in her department for help when I got stuck. Except they were all slammed with their own projects, so although they were willing to help me, it took a while to get my questions answered because (understandably) they were busy doing other stuff first.

From bad to worse

The Hubby had run the errands I was planning on running after work, so that was covered, but we were going to miss our restaurant RSVP. We weren’t too worried since it was a Wednesday, so we could find somewhere else to go no problem. The day had been crazy, but things could still end on a good note…

I took some deep breaths on my walk home from the bus station to get ready for a nice night. Then I walked into the house to hear sounds of frantic scrambling around. It was The Hubby, trying to find his phone so he could call me and let me know he’d found Little Dog chewing on one of the ant traps we put out over the summer when he got home.

Now, we know to keep things like this out of the reach of the dogs. This particular ant trap had been wedged waaaay far back behind our fridge, and could only be reached if Little Dog were to somehow squeeze her stocky little body all the way down the gap between the fridge and the counter, which is like 4 inches wide. I did not think this was possible. I still don’t think it is. I have no idea how she got the thing, but when The Hubby came home, he found her on the couch, happily gnawing away at the half-chewed ant trap in her paws.

Long story short, date night did not happen. We instead spent our night calling our vet, who was already closed, calling the emergency animal clinic, then calling Animal Poison Control because the emergency clinic said they would have better info on what particular ant traps contain what ingredients, and how those ingredients would affect a Little Dog.

The good news is the Little Dog is OK. We kept an eye on her all night, but I don’t think she actually got any of the bad stuff inside the trap (although she looked reeeeally close when The Hubby got home). The bad news is that we spent the night nervously watching her to see if she started acting sick, and I went to bed feeling exhausted, nervous, and remembering at the last possible minute that I never did put up my Wednesday post.

So now you get a super-long one on Thursday instead.

I think my next post will be on how to roll with the punches when things are going wrong left and right. Want to have your advice in it? Leave me a comment and tell me how you handle horrible days like this.