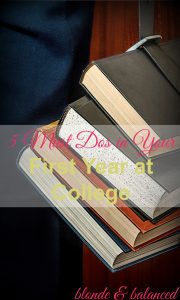 Your first year at college is exciting.  It’s a new beginning and a time to make changes in your life – hopefully for the better.  Meeting new friends, living in new surroundings and exploring a new city are all a part of college life.  But it’s not all body shots and parties during the next four years.  Remember that you’re there to learn and more importantly start your life as an adult.

Your first year in college can be a whirlwind, but it’s important not to get caught up in the chaos.  Have fun while remembering why you’re there.  It’s a good idea to set goals to make sure that you get the most out of your college life – both personally and academically.

Here are some must dos during your first year at college:

Being away from everything you know can quickly become a lonely place.  The social aspect of college is such an important part of the experience, take it from a girl who graduated many years ago without a single friend.  Not making friends in college is probably one of my biggest regrets.

I had acquaintances and group work friends from my program, but now ten years after graduation I don’t keep in contact with a single one – not even on Facebook.  I was too busy going to classes and working two jobs to make friends and now that I look back on it, that’s just sad.

Being a part of something during college is a great way to fit into something when everything is new.  It’s also an easy way to make friends and meet people who have something in common with you.   The club could be academic such as debate or science, it could be athletic such as running or rowing, or it could be personal interest such as a book club or acapella group.

I pledged a sorority during my first year of college and participated in a few social events before dropping out.  Did you know that you have to pay an annual fee in order to be a member of a sorority?  I thought they were completely funded by the school so as a broke student with rent and tuition to pay unfortunately I couldn’t afford it.

Take advantage of the student center

At my university they also gave out yearly planners to all students in September.  Not only were they a great way to stay organized, before Smart Phones, but they were full of coupons for local restaurants and stores.  Next time you’re in the area stop by the student center and get to know your student body.

Having a part time job during your first year of college can be hard to manage, but the benefits far outweigh the cons.  A job puts extra money in your pocket, helps meet new people and allows you to gain valuable skills that can be used in the real world after graduation.

I still keep in touch with two people from my very first part time job during my first year of college.  I consider them extremely valuable friends.  They were both away from home too and spending 10 to 15 hours a week together talking about life, paying rent for the first time, families and school really helped us form a bond that’s still strong today.  My college life would have been very different if I didn’t have a part time job.

Business Insider says that one of the biggest mistakes students can make during the first year of college is picking a major you don’t like.  “Don’t stick with a major you hate just because of potential job prospects.”

That’s great advice, I changed my major three times before graduating from French to Urban Planning and then finally I stuck with Economics.  It took some time, but I finally found my place.  Now I have a successful job in finance and it was all thanks to finding myself during college.